Gameover Zeus software? Virus could be lying dormant in thousands of American computers

The software can lie dormant on computers before draining accounts
Thousands of American computers may be infected with the malware, which is extremely sophisticated and can evade anti-virus software
An international police effort has halted the spread of the botnet, giving computer users two weeks to install anti-virus before the virus hits again

The dangerous cyber pandemic known as Gameover Zeus could have infected thousands of American computers and be lying dormant gathering data, experts say.

The malware, which the FBI estimates has hit between 500,000 and one million computers worldwide, has resulted in users losing tens of millions of dollars.

Gameover Zeus, which experts say is ‘sophisticated’ and capable of evading anti-virus software, infects a user’s machine when they open a PDF or click on a link sent to them in an email.

Once it is set up on the computer, Gameover Zeus will intercept all financial transactions and rewrite them, so that payments made by the user will be redirected into other accounts.

The malware also has the power to disguise unapproved payments that are made, meaning that thefts might have occurred even if accounts appear normal.

‘It keeps track of balances; it automatically corrects the numbers on the balance. It’s so sophisticated that it hides its tacks,’ said Nick Savvides, senior principal systems engineer at software giant Symantec.

The malware has hit computer users around the world, with the most incidents reported in the U.S. and Italy – 13 percent and 12 percent respectively. Seven percent of incidents have occurred in the UK.

But Mr. Savvides stated that many users could have downloaded the virus already and it may be lying dormant on their machines ready to be activated at any moment.

The Gameover Zeus malware was shut down by an international police effort this week, spearheaded by the FBI and Symantec.

This is the third attempt to shut down the malware, which first emerged in 2011, and the FBI is reporting that users have two weeks to clean up their hard drives and install anti-virus software before the network responsible for Gameover Zeus will be operational again.

Gameover Zeus has been so difficult to shut down because it uses peer-to-peer software, meaning that even if the main server is shut down, infected computers can continue to communicate with one another and continue operating.

Another reason is that once installed on a computer, Gameover Zeus has the ability to evade anti-virus software.

Computers are often concurrently infected with Gameover Zeus and a separate piece of malware, Cryptolocker, and there is some evidence linking the two pieces of malware back to an Eastern European network.

The Cryptolocker malware often comes into effect if the user is not a ‘viable’ victim for Gameover Zeus and the network cannot access their financial details.

Cryptolocker then locks the information on the computer and holds it to ransom. 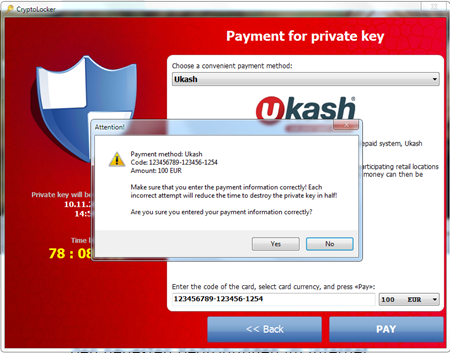 At the moment the software demands one Bitcoin, an untraceable form of online currency favored by criminals, which is around $500.

FILES HELD TO RANSOM: HOW CRYPTOLOCKER LOCKS YOUR FILES AND THERE’S NOTHING YOU CAN DO

Cryptolocker is malware run by the same gang behind Gameover Zeus and they are often installed on computers at the same time.

The Cryptolocker malware often comes into effect if the user is not a ‘viable’ victim for Gameover Zeus and the network cannot access their financial details.

Cryptolocker locks your computer, encrypts files and demands a ransom for them to be unlocked.

The U.S. Government admitted that at least one police force has been forced to pay a $750 ransom to release sensitive files.

According to Symantec data, three percent of people affected by the Cryptolocker malware pay the ransom rather than lose their files and paying the ransom seems to be the only way for users to gain access to their files once they have been attacked.

The U.S. Government admitted that at least one police force has been forced to pay this ransom to release sensitive files.